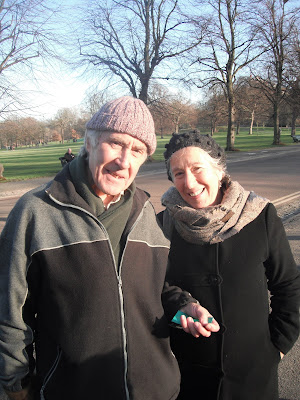 Barbara: Well, we were deep in the heart of the Cevennes country, both of us, which is south, south of France – south-westerly, south-east of France, quite a, quite a wild region, visiting friends, they live in the valleys, a valley of their own, and we were waiting for another couple who were walking, they were bringing another friend with them. And, erm, we saw the couple arriving. As soon as they were just approaching, my husband stood up suddenly. I thought why is he standing up. he stood up - yeah go on -

John: Well we were deep in the hills where nobody would know us, noone to interrupt our thinking at all, completely at peace with the surroundings. And then I stood up suddenly because the person who came behind the couple, she was a hillwalker and a guide, she knew a lot about hillwalking, what sort of boots you need, and how you need to be equipped. So I stood up and to my utter amazement, when I looked at this person, I knew her, because she had for many years been a West Londoner –

Barbara: - and the last time he’d seen her was thirty years before –

John: - actually even more than that, 1973. And to my utter amazement. I thought of all the people for me to see. this girl called Lorraine.

Barbara: A friend of friends

John: And she’s a very strong individual, loves hillwalking, and she, I think she’s a very good hillwalker and that’s, nowadays her home is in the Lake District, that’s where she lives. Quite an amazing story, to be sitting on a giant patio of gigantic slates and stone, and to think that you were completely within the wild hills, nobody’s going to, aah, and then out of the blue arrives this person who I’d last seen in 1973.

Barbara: And they recognized each other.