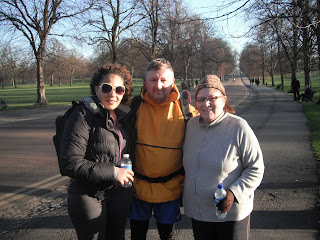 Lou: So the first day that I wore these I was coming home from work, uhm, uhm, and erm going down Canning Town. At the flyover I couldn’t actually stop, and I was going towards Stratford, and I was going so fast I couldn’t actually stop I had to go all the way up the hill Canning Town, and I actually bumped into someone and knocked them over. Yeah, yeah, well, the poor person, I couldn’t even stop, I just shouted I’m so sorry, flying past them with bags in my hands, sorry! It was so funny. That’s probably the funniest story. Do you want any other stories. Love stories, sad stories?

Fra: We’re training ‘cause we’re chucking Mum over the top.

Doug: We’re, uhm - I’ll tell it shall I? – we’re climbing the three highest peaks in England, Scotland and Wales in July-

Doug: - June, about eight or ten of us are going. We’re, uh, my mum died a few years ago so were gonna spread her ashes – two years ago -

Fra: We’re gonna chuck her over. Throw her ashes over the top -

Doug: So we’re climbing quite a few hills -

Doug: Should be ten of us but - we’re training now.

Fra: Get a van, all go down there.

Lou: We’re raising money. This will be the first pound in the fund.