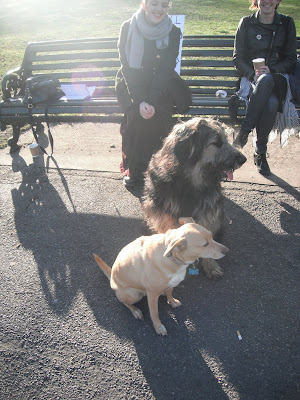 I don’t know his parentage but, uhm, my daughter works for Battersea Dogs Home. He came in as part of an unwanted litter and he was born the runt of the litter so my daughter bought him home for me because my old dog, well not this dog my other old dog was dying. Oh, he was old, he was 17, he was on his last, last legs, a very good old dog. So she brought him as a replacement and he’s called Parsley because when he first came, he used to have this big; he had this respiratory infection so his body was really skinny and his head was massive like Parsley the Lion from The Herb Garden. So that’s why he’s called Parsley. But he’s grown really well and, uhm, he’s a really lovely low energy dog and she keeps him in check and this is Flaxen. Flaxen, which means, uhm, yellow hair, she came to me, she’s nearly seven, I got her when she was about four or five months old. And she came, I worked for an animal organization called Celia Hammonds at the time, the police had raided a house, they brought in animals sometimes and they’d been breeding and selling dogs and they’d been breeding staffies and whippets and, staffies and whippets had obviously had a litter which I don’t know if you want this story actually so shes a staffi whippet. So she and the other four of her litter were put in a bin and set fire to and only her and one other one survived and the rest died. Her nose is broken in an L shape. She spent the first year of her life in my house under my daughters bed with a cat litter tray and just wouldn’t get out from under the bed. And so she’s, uhm, that’s poor Flaxen. And they live in a house with eleven cats, two rabbits, well I worked for Celia Hammonds, and, uhm, then I went to work at Mudchute Farm. He is an excellent ratter and unfortunately he killed a couple of ducks last week. So we cooked them for dinner. Eleven cats and two rabbits, that’s the fewest animals we’ve ever had.