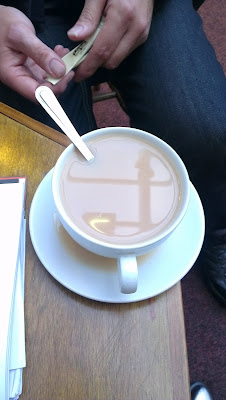 Uh. I stopped eating vegetables uh. When I was three. I was at nursery school and erm one lunchtime we were given a big. Bowl of vegetable soup. Ahm. And I, uhm at the time. I didn't like carrots very much so I thought I'd eat them first that meant that the peas would be saved for later and I'd have something to look forward to. But of uh some strange quirk of fate that day I had an large, a large quantity of. Carrots in my bowl and I. Was ill and had to be taken and lie down on the bed. And I was sick and. I kind of. It was very traumatic so I kind of stopped eating. Vegetables and all sorts of things. Ah initially my parents. Didn't really know because I'd hide it in a hole I found. In the living room. Which I think was where the gas pipe came in. There was a little hole and I, I'd just lift the lid and put this food down and then after a while they kind of realised and erm. A-and I think it was err you know there was a moment an opportunity missed there when they could have maybe sorted me out. It didn't happen and uhm so I continued not eating vegetables uhm. Until about a month ago and I had my first carrot a-about a month ago. Uhm. And it wasn't as bad as I thought ahm. I basically I have a friend who's a psychi-psychologist and she's been ill and so erm she thought she'd take me under her wing and try and change me and so she gave me a project with a carrot which involved. Keeping it by my bedside in a vase. And er touching it and being able to identify it in a line up. You know like if it was in the usual suspects I'd be able to spot. My carrot. Amongst five other carrots uhm. And then to think about. How the carrot has uhm. Come into the world. You know what sort of life it'd had in the field what what what what what sort of thing happened in the field during that time and all the different other interactions of of life. I also had to sort of watch some youtube videos on the benefits of carrots. Uhm which was really there were some really great ones a piece about keratin and some really great jokes about you never see a rabbit wearing glasses. Uhm. And err. Initially uhm. It started with a smoothie. So we met up and and err. Had a carrot smoothie. And uhm e-e-I think it. It was a bit strange because it was a bit like. I'm used to sweet things and so it was like it tasted like it was coming from the earth. But it was ok and I-I-I. 'Cause in the past I'd had a, a sort of reaction to to occasionally and I've wanted to vomit you know just when putting things in my mouth or. Or erm. It's just...got a real fear. And then erm we went out for my birthday and erm. I ordered steak and chips with a side order of carrots. And I left the carrots 'til the end and erm. And I cut them up into tiny little discs like one pence coins and I when they were err talking about other things I'd quickly slip one in and see what it was like and err. And. It wasn't so bad it was er er er it's not you know ever gonna replace cheese and onion crisps or anything but ahm you know I can I can kind of cope with that. And now I regularly have like carrot and apple smoothies err juice juice drinks now every couple of days and erm. I'm working towards my first tomato.