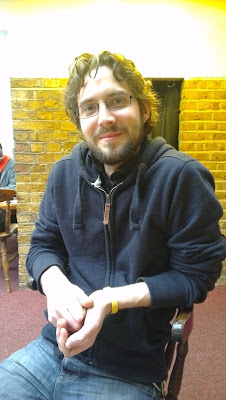 So uhm. I will tell you the story of how I came to be called uh Duncan Isaac and. Which as you may have noticed is a biblical name. So this would have been in 1983. When I was a mere foetus in my mothers stomach uhm well not in her stomach but in her belly. And uhm. My mother had.
Some interesting complications in that her. Waters started to drain. At only four months ah during the pregnancy. And they didn't fully break but there was a hole. And fluid was coming out so on. And as a result she got a pretty massive infection. And. In. 1983 certainly in Africa the standard medical procedure would have been to terminate the pregnancy. But. My mother was being cared for by a Catholic nurse. Called Sister Jacoba. And she. Sister Jacoba. Uh-huh. And. She err. Decided. That abortion was murder. Um being a Catholic lady. And err. She. She thought that my father would not be happy about the pregnancy being. Aborted. Uhm. And my father was at the time travelling. Uhm. From an area of of South Africa which was formerly known as the Trans-Sky. To Durban. Which is where. My mother was. In hospital. Which is a very long drive. Across. A large portion of of Southern Africa and they could obviously couldn't get hold of him because it was before mobile phones and all of that. And S-Sister Jacoba knew that my father wouldn't be happy. About them aborting the pregnancy without talking to him first so she literally barricaded herself. In the room. And wouldn't let the doctors in took the drip out of my mother's arm that was was going to to sort of abort the pregnancy I'm. Not sure what drugs it was but. That's what those drugs did. Uhm. And it it it was funny because. Just before this happened. My father and Sister Jacoba had read a scripture. Uhm. Which was. Err not terribly well versed. Ahm but it. Can't remember which which book of the bible it is but it is essentially it was God talking to Abraham. Uhm. Abraham's wife was too old to have children. And God had told Abraham that errm that he would have a son called Isaac. Erm and despite you know her being something like eighty years old at the time and er nevertheless er my father had kept that with him all the way through this really troubled pregnancy and so had Sister Jacoba and she nevertheless. Uhm. About. Well three months later after these these initial problems I was born by Ceserian section. When my Dad proudly announced that I would was to be called Isaac uhm. And my mother said not on your nelly we'll give him a good Scottish name he'll be called Duncan uhm but his middle name can be Isaac. Uhm. And that's. That's pretty much my story of hope. so. He'd always. Kept that with him all the way through the. The pregnancy both of them. Uhm. That. That he would have a son called Isaac and. Nevertheless he did.